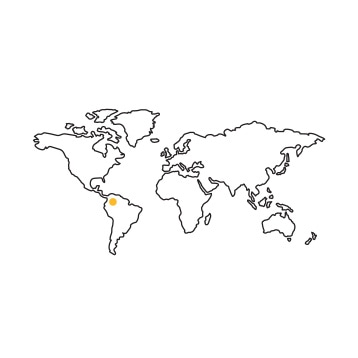 About El Naranjal (with thanks to Melbourne Coffee Merchants):

This micro-lot was produced by Carlos Julio Diaz and Maria Isabel Lopez Soland on their 12-hectare farm, El Naranjal (meaning “the orange” in Spanish) located near the small community of Laureles, in the municipality of Ibagué, in Colombia’s Tolima state.

El Naranjal is situated in the high hills to the south-west of Tolima’s capital city, Ibagué. There are no roads that access the farm, so visitors must climb a steep and slippery path from 1750 meters to 1900 meters above sea level, across rugged terrain. The double story farmhouse sits on the peak of a hill, surrounded by high mountains and coffee trees. The highest points of the farm are over 2000 meters above sea level and can only be reached on foot or by mule.

Before coffee, Carlos Julio farmed racacha (a yuca-like vegetable) with his father nearby. After saving up, he and his wife of 32 years, Maria Isabel, were able to purchase El Naranjal in 1994. Carlos Julio now co-manages the farm with his son, Juan Carlos. The farm is 12 hectares large, 8 hectares of which are planted with coffee trees of the Caturra, Colombia and Castillo varieties. The family also farms plantain, beans and oranges (for which the farm is named).

Historically the area around Laureles has been known for cattle, sugarcane and vegetables. Coffee is a relatively new crop for the region, having only been planted in the last 30-40 years. Most coffee farmers purchased land in the area because it was more affordable than traditional coffee farming areas like Planadas and Chaparral, in Tolima’s south. Higher elevation areas were considered less prosperous than lower areas because they typically achieve lower yields. However, this region has since gained acclaim for the high cup quality, sweetness and complexity of the coffees produced here.

Most farms in the region are planted with the Caturra variety, which was the most popular variety during the 1970s and 1980s when the farms were established. Coffee in Laureles is farmed with traditional techniques. Fertilisation occurs around three times a year, usually after manual weeding, and pesticides are rarely used. The coffee is selectively hand-harvested, with most labour being provided by the farmers and their families.

Coffee from Tolima has historically been very difficult to access due to the region’s isolation and instability. For many years this part of Colombia was under the control of Colombia’s notorious rebel group, the FARC, and as a result, it was unsafe and violent. Since 2012, safe access to this region has been possible as a result of peace talks between the Colombian government and the rebels. Since this time some stunning coffees from small producers have become accessible to the international market.

The word ‘Tolima’ comes from the local indigenous language and means a “river of snow or cloud”. The region sits on the Cordillera Central, in the middle of the three mountain ranges that provide a range of microclimates well-suited to high-quality coffee production. Coffee is the leading agricultural activity in the region, followed by beans and cattle.

The most well-known regions in Tolima for specialty coffee are Planadas and Chaparral in the south. This coffee comes from the areas surrounding Ibagué, which is further north in the state. The city is also known as the “Ciudad del Abanico” or the “city of the folding fan” because when you look at it from the sky the rivers running from the mountains split up the crops of rice and cotton, and it looks like a beautiful handmade folding fan.

The coffee is sourced by MCM export partners, Pergamino, who purchase coffee from about 40 independent coffee growers in the region of Ibagué. This is the second year that Carlos Julio has sold coffee to Pergamino. During a visit to his farm, he recounted the story of the first time he sold a coffee lot to them, when his coffee only achieved a cup score of 80 from the QC team. Following the advice of Pergamino’s co-founder and agronomist, Léonardo Henao Triana, Carlos Julio began fermenting his coffee to remove the sticky fruit of the coffee cherry from the seed, rather than using a mechanical demucilager. The result was a significantly higher cup score, which could be sold with a higher premium. With Pergamino’s assistance, Carlo Julio’s goal is to have a consistent cup score of 86 or higher, which will secure him the best premiums. He intends to add a second fermentation tank to his ‘micro-beneficio’ (mill) so that he has the space to ferment all of his coffee, even during peak harvest.

During harvest, Carlos Julio delivers small lots (around 100-150kg) of dried parchment to Pergamino’s Ibagué warehouse every 1-2 weeks. Mules are used to transport the coffee down from the highest parts of El Naranjal to Laureles, where it is transferred into small trucks to complete the journey to Ibagué. Only recently a bridge was built over the river that runs through Laureles, Rio Luisa – previously mules had to carry to coffee through the river and many drowned as a result. The new bridge is an incredible point of progress for the small community.

The warehouse in Ibagué is operated and overseen by manager Gonzales, who has a long history of working with Pergamino – in fact, he was Léo’s first boss in coffee! Upon delivery, a sample of the dried parchment is milled and assessed for physical attributes, including uniformity of size, presence of defects, moisture content and seed to hull ratio. If the coffee passes the physical assessment it is accepted and the farmer receives their first payment for the coffee, calculated by the weight delivered and a base rate related to the physical quality of the parchment.

The coffee is then cupped and assessed for sensory attributes. After being accepted by the team in Ibagué the coffees are transported to Pergamino’s QC lab in Medellin, Antioquia, where they are further assessed by an expert team of cuppers. Each lot is carefully evaluated and, based on the cup score and profile, the coffee is sorted into different grades of quality and combined into exportable sized lots. Feedback on each lot is relayed back to the producer and after it has sold a second payment is made to the producer according to premium the coffee attracted.

Each season the team at Pergamino cups through hundreds of small lots from independent farmers, looking for coffees that exhibit excellent cup characteristics and showcase the region where they were produced. This year, Carlos Julio’s and Juan Carlos’ coffee was selected to be processed separately as a micro-lot for its distinct character and high cup quality.

Pergamino has done a lot to help promote commercialisation of specialty coffee throughout Tolima and have actively been working to source and support coffee producers in regions where there is a high potential for quality, but historically have not had access to specialty buyers. Read more about their work here.

This lot was selectively hand-harvested, with most labour being provided by Carlos Julio and his family. During peak harvest, the family hires about 10 local labourers to help harvest the coffee cherry, who are paid on a daily rate. Carlos Julio prefers to work with the same pickers every year as he has taught them how to select only the ripest cherry for processing. To ensure pickers come and work for him he pays a 15%-20% premium on the local daily rate and provides workers with three meals a day.

The coffee was fermented for 24hrs in the cherry, before being processed using the washed method at El Naranjal’s ‘micro-benficio’ (wet mill). The coffee was floated in the mill’s plastic hopper and then pulped using a small electric pulper. The coffee is then fermented for a further 36hrs in bags, before being finished in the tank for another 12hrs. This is a space saving method, which will change once new tanks are added to the mill.

Following fermentation, the coffee was washed using clean water from the Rio Luisa.  It was then carefully dried (over 20-30 days) on parabolic beds, which are constructed a bit like a ‘hoop house’ greenhouse, and act to protect the coffee from the rain and prevent condensation dripping back onto the drying beans. The greenhouse is constructed out of plastic sheets and have adjustable walls to help with airflow, and temperature control to ensure the coffee can dry slowly and evenly.