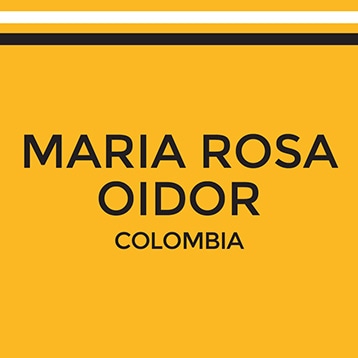 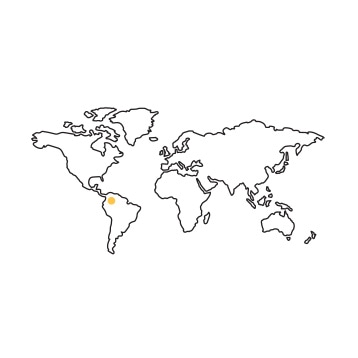 About Maria Rosa Oidor (with thanks to Melbourne Coffee Merchants):

Maria Rosa Oidor runs her farm, Los Nogales, with her husband Antonio Pillimué and their four children. The farm is situated a thirty minute walk from the small town of San Antonio, where the couple also has a small shop. Maria Rosa and Antonio saved the money to buy their three-hectare farm from the savings they made from their shop some fifteen years ago.

Today, Maria Rosa’s entire family is dedicated entirely to coffee. Her eldest son, Robinson, has worked as a leader of the local growers’ association ASORCAFE (to which Maria belongs) and is a distinguished, well-known coffee producer in his own right. Her younger son, Nilson, has also inherited part of the family farm and is working to learn all about coffee. Maria, at the age of 58, still takes a hike up the mountain every day to organize pickers and schedule the work for the day. She is an impressive woman, and an inspiration to many in the region.

Despite the small size of the farm, Maria and Antonio decided to plant three different varieties in the high hills upon which their land lies: Caturra, Typica, and Tabi. The high altitude of their farm (2,000 metres above sea level) makes it possible to continue growing these more disease-vulnerable cultivars despite the dangers of coffee leaf rust. It also means the coffee cherries are able to ripen more slowly, allowing a higher concentration of sugars to develop, resulting in a sweet and complex cup.

The coffee trees at Los Nogales are fertilised up to three times a year depending on the state and quantity of coffee on the tree, and seeds for new trees are collected and germinated on the farm itself. During the harvest, up to 15 workers help with picking, and the family employs one permanent worker who helps maintain the crop throughout the year.

Over the years, Oidor has worked hard to improve her farm, and her hard work has paid off. She works with ASORCAFE to improve her quality annually and now is able to sell her high-quality coffee on the specialty market.

ASORCAFE represents, in total, around 450 producers. This specific lot, however, has been selected only from Maria Rosa’s production. Every single producer delivering to the group has their lot cupped by the Association’s cupping lab in Pedregal. This particular lot stood out on the table as an exceptional micro-lot, and was kept separate due to its unique and incredibly special cup profile.

The ASORCAFE association of coffee growers was founded in 2004 by 10 coffee growers with an entrepreneurial spirit who were tired of private parchment buyers paying them below national prices. The region’s violent past, with a heavy presence of FARC guerrillas, had historically prevented the FNC (Colombia’s excellent national coffee board) and specialty-focused buyers from accessing coffee in the region. In recent years, as violence has diminished, growers in the region have been able to seek increased access to markets for quality, not only taking advantage of the region’s wonderful coffee-growing conditions but also the economic resources that nearby tourist destinations bring (for instance, the World Heritage Site Parque Nacional Arqueológico de Tierradentro).