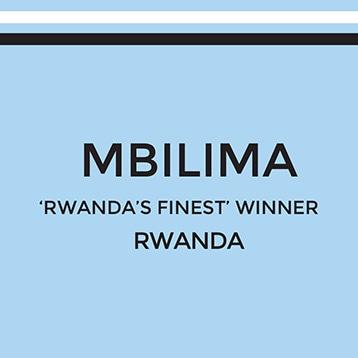 About Mbilima’Rwanda’s Finest’ Winner (with thanks to Melbourne Coffee Merchants):

This very special lot won second place in this year’s Rwashoscco’s ‘Rwanda’s Finest’ Auction which was held to celebrate Rwashoscco’s 10th anniversary as pioneers in specialty coffee. It was awarded an epic 90 points on the cupping table by an international and national jury and we were thrilled to win this coffee during the auction in September 2016. It is so vibrant and exciting and a true testament to Mbilima’s commitment to hard work and quality. This particular lot was only 23 bags in size.

This award-winning coffee comes from the Mbilima washing station which is owned by the Dukunde Kawa Cooperative. The washing station is located in the rugged Northwest in the town of Musasa, at around 2,020 metres above sea level, making it one of Rwanda’s highest washing stations. Close to the famous Virunga (Volcanoes) National Park, this part of the world has the mineral-rich soil and lush environment that are well-suited to specialty coffee.

By Rwandan standards, the Mbilima washing station is quite small, representing over 500 local producers in the area. Four permanent staff and 92 seasonal workers are employed by the washing station—of whom 95% are women. Quality control and day to day operations are overseen by Jon Bosco Habimana, who has been the Wet Mill Manager since 2012.

Today, it’s a different picture. Farmers who work with Dukunde Kawa have seen their income at least double, and the co-op produces outstanding lots of coffee for us year after year.

In addition to the great work that the cooperative does with quality improvement and assurance, it also operates various social programs that greatly contribute to the livelihoods of their members. School fees and medical insurance are provided along with training in quality and productivity in cultivation of coffee. Classrooms have recently been built at the Ruli washing station, along with a model farm that is used to demonstrate best practices in coffee farming.

In addition, at the Ruli washing station, the cooperative has also built a milk-refrigeration facility to help generate off-season income for farmers and their families. Farmers are able to supplement their income through the sales of milk, and the community benefits as it is able to access fresh milk and cheese which helps improve their diets. In addition, their cows produce very useful fertiliser for the coffee! The cooperative is now also raising funds for a pasteurisation machine, which will enable farmers to sell their milk in Kigali for higher prices.

Dukunde Kawa has also built a milk-refrigeration facility to help generate off-season income for farmers and their families.

‘Dukunde Kawa’ means ‘love coffee’ in Kinyarwanda (Rwanda’s official language), in reference to the power of coffee to improve the lives of those in rural communities.

The cooperative works extremely hard to improve the lives of its members and their families, and to produce the best quality coffee possible. According to the co-op’s president, Anastase Minani, Dukunde Kawa’s goal is to be the very best cooperative in Rwanda. We think they’re well on their way to achieving this goal!

All lots processed by Dukunde Kawa are separated by day and cupped individually. Upon delivery as cherry, the coffee receives a paper ‘ticket’ that follows the lot through all its processing. This ticket bears the date of harvest and the grade (A1, A2 etc) of the coffee – for instance, if a coffee lot is called ‘Lot 1- 06/04 – A1’, this means it was the first lot processed on April 4 and the grade is A1. This simple but effective practice is a crucial tool in controlling quality and ensuring the traceability of lots.