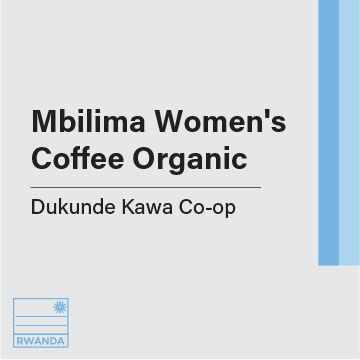 Incredibly perfumed and floral. Butterscotch and custard with a citrus and tea-like finish.

About Mbilima Women’s Coffee – Organic (with thanks to Melbourne Coffee Merchants):

This special micro lot was produced by a group of women who are members of the Dukunde Kawa cooperative. They own small farms near the Mbilima cooperative, which is located in the rugged Northwest in the town of Musasa, at around 2,020 metres above sea level, making it one of Rwanda’s highest washing stations. Close to the famous Virunga (Volcanoes) National Park, this part of the world has the mineral-rich soil and lush environment that is well-suited to specialty coffee.

By Rwandan standards, the Mbilima washing station is quite small, representing only 274 local producers in the area, 60 of which are women.

As members of the Dukunde Kawa cooperative the members are guaranteed a minimum price for their coffee cherries, and are paid a good price to ensure the very best quality cherries are delivered. In addition to this they receive a bonus which is directly linked to the quality and prices paid for the coffee. By separating their coffees out, the women are able to directly benefit from any higher prices paid specifically for their lots (rather than these profits being shared equally amongst all members). This creates a very important and effective incentive for them to work hard as a collective towards achieving the very best quality possible; and the results are evident in the cup.

Coffee is an important cash crop for Dukunde Kawa’s members, but as it only harvests once a year, the cooperative is always looking for ways to support its members outside of the harvest. During our last visit to Rwanda we asked Isaac, the Executive Secretary of Dukunde Kawa, what their members needed the most. He explained that the women needed a room for their craft work. Many of the women are talented weavers, and during the off season (and on days they are not harvesting coffee) they weave incredible baskets that they sell at local markets. Currently this is done outside due to lack of space, however having a dedicated room would protect them from the elements, providing a much nicer a space for them to work and, importantly, connect — many of the women that form this group are widows — and the support and sense of community they get from being part of this group is incredibly valuable.

Dukunde Kawa has a very transparent relationship with its members. They pay a fixed rate at the start of the harvest for coffee delivered to the station, and then reward all farmers with a second payment later in the season, based on any additional profits they have been able to secure from lots that have sold for higher than expected prices.

In an effort to continuously help their members improve the quality of coffee produced, the cooperative has built classrooms, along with a model farm that is used to demonstrate best practices in coffee farming

In addition to the great work that the cooperative does with quality improvement and assurance, it also operates various social programs that greatly contribute to the livelihoods of their members. Assistance with school fees and medical insurance is provided, along with training in quality and productivity in cultivation of coffee. In addition they have set up a “Farmers Savings Account” which provides a line of credit for farmers needing access to funds (for things like health care, problems at home, farming materials etc).

In addition,  the cooperative has also built a milk-refrigeration facility to help generate off-season income for farmers and their families. Farmers are able to supplement their income through the sales of milk, and the community benefits as it is able to access fresh milk and cheese which helps improve their diets. In addition, their cows produce very useful fertiliser for the coffee! The cooperative is now also raising funds for a pasteurisation machine, which will enable farmers to sell their milk in Kigali for higher prices.

The cooperative works extremely hard to improve the lives of its members and their families, and to produce the best quality coffee possible. According to the cooperative’s former long-term president, Anastase Minani, Dukunde Kawa’s goal is to be the very best cooperative in Rwanda. We think they’re well on their way to achieving this goal!

Four permanent staff and 92 seasonal workers are employed by Mbilima washing station—of whom 95% are women. Quality control and day to day operations are overseen by John Bosco Habimana, who has been the Wet Mill Manager since 2012. Mbilima has recently become 100% organic, Rainforest Alliance certified, UTZ certified, and Fair Trade certified. John Bosco explained that becoming certified has been extremely useful in formalising and documenting a lot of things that the cooperative was already doing ‘to better the lives of our producers and quality of our coffee. It’s been a lot of work to get the certifications,’ he explained, ‘but it also made us realise how many positive things we were already doing. These certifications reinforce this.’