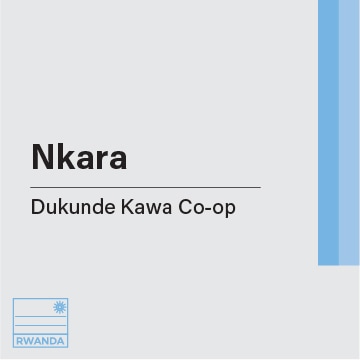 About Nkara (with thanks to Melbourne Coffee Merchants):

This coffee comes from the Nkara Washing Station which is owned by the Dukunde Kawa Cooperative. The washing station is located in the rugged Northwest in the town of Musasa, at around 1,856 metres above sea level.

Nkara is quite a small washing station by Rwandan standards, representing just over 100 cooperative members. Seventy-three seasonal workers are employed by the washing station—of whom 95% are women. Nkara is managed by Michel Dusengimana.

Today, it’s a different picture. Farmers who work with Dukunde Kawa have seen their income at least double, and the cooperative produces outstanding lots of coffee for us year after year.Dukunde Kawa has a very transparent relationship with its members. They pay a fixed rate at the start of the harvest for coffee delivered to the station, and then reward all farmers with a second payment later in the season, based on any additional profits they have been able to secure from lots that have sold for higher than expected prices.

In an effort to continuously help their members improve the quality of coffee produced, the cooperative have built classrooms, along with a model farm that is used to demonstrate best practices in coffee farming

In addition to the great work that the cooperative does with quality improvement and assurance, it also operates various social programs that greatly contribute to the livelihoods of their members. Assistance with school fees and medical insurance are provided along with training in quality and productivity in cultivation of coffee. In addition they have set up a “Farmers Savings Account” which provides a line of credit for farmers needing access to funds (for things like health care, problems at home, farming materials etc).

In addition, the cooperative has also built a milk-refrigeration facility to help generate off-season income for farmers and their families. Farmers are able to supplement their income through the sales of milk, and the community benefits as it is able to access fresh milk and cheese which helps improve their diets. In addition, their cows produce very useful fertiliser for the coffee! The cooperative is now also raising funds for a pasteurisation machine, which will enable farmers to sell their milk in Kigali for higher prices.

The cooperative works extremely hard to improve the lives of its members and their families, and to produce the best quality coffee possible. According to the cooperative’s former long-term president, Anastase Minani, Dukunde Kawa’s goal is to be the very best cooperative in Rwanda. We think they’re well on their way to achieving this goal!