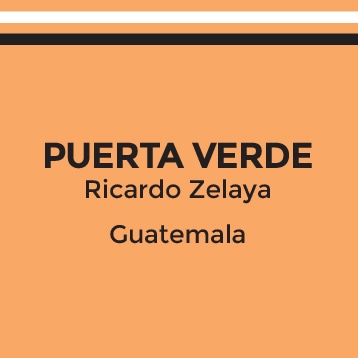 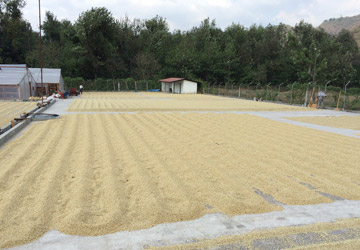 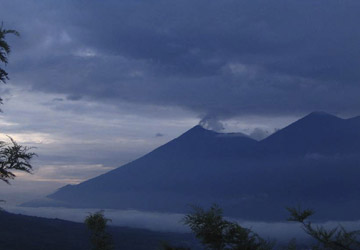 Sitting at 1,540 metres above sea level near Ciudad Vieja, Sacatepequez in Antigua, Puerta Verde (‘Green Door’), lies in the magical Panchov Valley. The valley is home to rich volcanic soil and plentiful water – it is not surprising that is home to some of the best coffee grown in the area.

The Zelaya family has owned Puerta Verde since 1999. Overseen by Ricardo Zelaya, one of Guatemala’s most renowned coffee farmers, the farm’s daily management falls to Marcos Rompiche, the Administrator, and Israel Yool, the farm’s Production Manager. Marcos is the 3rd generation of his family to work the farm and has, himself, worked there for 22 years. Israel is the 2nd generation of his family and has 16 years working on the farm under his belt. Together with Ricardo, they know every inch of the farm’s terrain and are keenly aware of minute differences in climate and soil composition between plots. This intimate knowledge of the farm’s terrain and plants is matched by the Zelaya’s commitment to quality and environmental preservation, something that is central to their coffee-producing ethic. In addition, Ricardo’s forward-thinking and innovative approach to farming helps the farm yield some of the region’s most unique coffees.

Ricardo Zelaya, who comes from coffee farming royalty – is the fourth generation to cultivate coffee in Antigua and owns and manages some of the country’s best and most recognizable farms, including Santa Clara – a farm who’s coffee we had the pleasure of roasting previously. Quality has always been paramount for him and his family, and Antigua’s rich volcanic soil, its latitude, longitude and altitude; and its crystal clear water, all contribute to a beautiful ‘cup’. Not one to rest, Ricardo has been very proactive in selecting varieties suitable to the natural location that will produce an exceptional and unique ‘taza’. His farms are scrupulously managed, with great attention put into pruning schedules and pest and disease control. Since acquiring Puerta Verde, all but 1 of the farm’s 39 hectares have been replanted with primarily Caturra (60%) and Bourbon (20%). The remaining 20% of the farm’s area has been planted to more unusual varieties, such as Villa Sarchi and Bourboncito.

As well as their commitment to quality, the Zelaya’s are passionate about sustainability. The family’s farms are scrupulously well-managed – from the careful selection of the varietals planted, to the close supervision of the dry and wet mills. The coffee is shade grown under Gravilea trees – protecting the plants from direct sunlight, maintaining soil health, and providing an important habitat for birds and insect life. Ricardo’s mill is also environmentally friendly, with all organic by-products being recycled and reused. The water used in the wet processing of the cherries is drained into sedimentation tanks to prevent pollution of the local river systems and the pulp is transformed to humus by worm culture.

Workers on each of the Zelaya family farms are seen as members of the family, which is why, in 2010, Ricardo began a scholarship program to help workers pay for the education of their children. This program is funded by Ricardo and has the support of three buyers from abroad each of whom have supported the cause since 2012; currently this project is managed by Ricardo’s daughter Bel – who has a degree in Special Education. Bel is seeking formal non-profit status and aiming to expand the program to include not only all the children whose parents work on the farm but also those from surrounding communities.

The Zelaya family treats their employees like family and many have been with the farm and the family for generations. For instance, the farm Administrator, Marcos Rompiche, has worked for the Zelayas for 22 years and is the 3rd generation to work the land. The Production Manager, Israel Yool, has 16 years working for the family and is the 2nd generation to do so. Including them, the farm provides work for 25 permanent employees year-round, all of whom help Ricardo manage the processing and production for Fincas Juaja, Santa Clara, Puerta Verde and San Augustin. The family hires an additional 332 additional individuals during the harvest (including 250 for picking alone!).

Under Ricardo’s watchful eye, coffee cherries are picked by hand using his skilled picking team who are trained to only select the very ripest cherries. This team of pickers are paid more than neighbouring farms pickers, to compensate for their lower yields but higher skill level in coffee picking. During the harvest Ricardo instructs at least 5 passes through the farm, and puts the pickers in rows to ensure that everything is being done as methodically as possible. Coffee cherries are delivered to the wet mill each day between 4-7pm and pulped immediately. They are then put in fermentation tanks and fermented for 12-20 hours until around 75% of the mucilage is removed. The remaining mucilage is removed using mechanical washers and then the clean coffee in parchment is dried on raised beds in Ricardo’s custom built greenhouse until they reach 10.5% humidity.